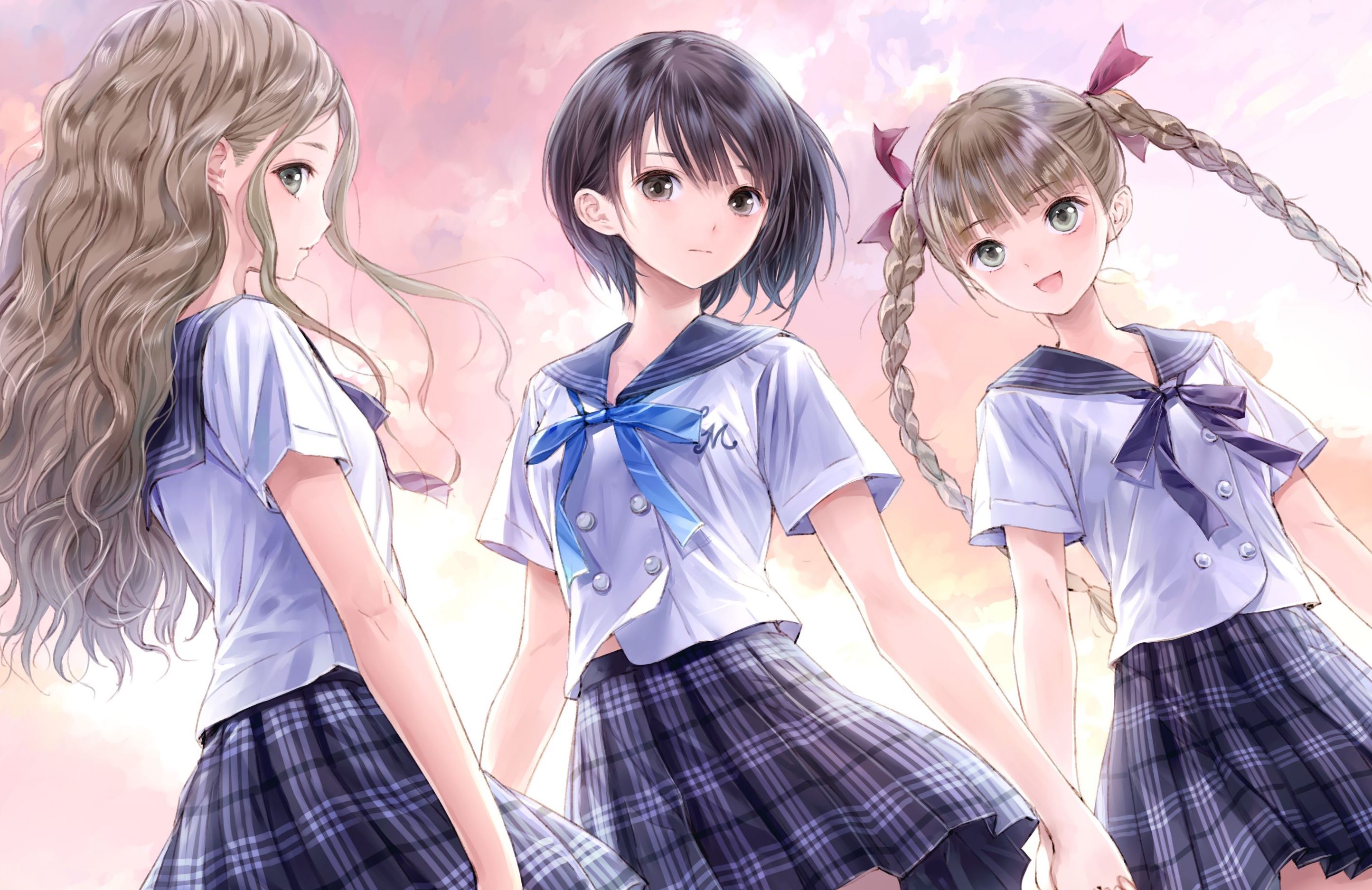 For some, the thought of being a magical girl is overwhelming. Every day there are people out there who could only dream of one day gaining the power and abilities of a true magical girl. Sadly, those dreams might be fictional, but that’s why we have games like Blue Reflection, right?

Blue Reflection takes the everyday hardships of being a teenage girl in highschool and then mixes in some magical girl powers to sweeten up the concoction. What we get is a fairly well told story of difficulties that some girls might face in high school, with an RPG system that isn’t given the room to shine like it should.

“Blue Reflection’s premise sounds rather weak, but I actually enjoyed how authentic some of the issues these high schoolers had.”

Blue Reflection introduces us to Hinako Shirai, a former ballet dancer who has injured her leg and must now go to high school as a “regular” student. She ends up meeting two strange classmates, Yuzuki Shijou and Lime Shijou, who just so happen to secretly be protecting the school with magical girl powers. They choose Hinako as their newest member and enlist her into their ranks, against her will at first.

To coerce Hinako into joining them, the sisters inform her that if she helps them she will be granted one wish. Naturally this means that Hinako will want to fix her leg in order to join ballet again. Throughout the story, Hinako deals with the stress of being a regular student, but is driven by the motivation of fixing her leg. Along the way the group meets other girls who are dealing with their own issues and helps them get through it using their magical girl skills.

Blue Reflection’s premise sounds rather weak, but I actually enjoyed how authentic some of the issues these high schoolers had. Things like needing help with talking to boys or getting bullied. Each chapter introduced a new possible hurdship that a person of this age might be confronted with and it was nice to see the way the problems were approached.

These problems manifest within these girls to produce items called “Fragments,” which are highly sought after by the magical girls to battle against boss enemies. When a girl is consumed by their emotions they go “Rampant” and this is where the magical girls come in. After a girl loses control, Hinako and the gang can jump into their conscious and travel to a shared world known as “The Common.” From there, the girls will be able to solve the real world issues by finding these Fragments.

If it sounds like there is a lot to Blue Reflection that’s because there is. You see, I went into Blue Reflection expecting an RPG with battles and grinding similar to what is in another of Gust’s games, the Atelier series. Instead what I found was a visual novel with optional fighting and lots of dialog. I’ll be the first to tell you that I enjoy visual novels, but Blue Reflection has a really good RPG battle system that I fear isn’t used to its full potential.

I say the battles feel optional because their is no experience allocated in the game, battles simply wield crafting items. In order to level up you gain points after completing missions that you can distribute to the three girls to level up their Attack, Defense, Support, and Technique. Gaining these points can require very little interaction with enemies, outside of the missions that ask you to defeat one or two of a certain type.

What makes the battle system good though are the awesome action animations that Gust has created for each of the girls. Whether you’re doing an Attack or Support skill, the choice is followed with a handful of various animated magical lasers, swords slashes, beams of light, aerial acrobatics, and more. On top of that there are a lot of skills to be learned and they’re each unique. However, you probably won’t be using all of them — instead I found a select few of the high damage attacks and stuck with those.

In battles players will need also need to utilize the Knockback feature. This is one that is pretty useful if you’re trying to wrap up a battle quickly. Certain attacks will push back enemy characters to make them wait longer. However, the downside might be that the attack isn’t that strong or uses up a lot of MP. Sadly, the game never gets that difficult to fully explore this feature. This is also because between battles your party is completely healed, so items aren’t really something that you’ll use.

Blue Reflection is played through Haniko as she lives out her day to day life at school. There isn’t a timer, as seen in some of the Atelier entries, so exploration can be commenced at the player’s own pace. By not having a timer, I feel that this hurts the game in a couple of ways, but mostly is exposes one huge downside: NPC dialog. The dialog spoken by NPCs will rarely change and the lack of timer makes it clear that you don’t really need to talk to anyone. This system is seen in games like Persona 5, where things can be changed depending on the date; however Blue Reflection opts out for a rather stale approach at using this day to day system.

However, when it comes to characters that impact the story, Blue Reflection has some really great stories to tell. Some are hilarious and will leave you in disbelief that they actually “went there”, while other stories are more serious and have a deeper meaning. I can tell you that each character faces difficulties that might not seem meaningful when compared to the bigger issues, but the conversations that the characters have accurately portray what a high schooler’s mind would be consumed with: sports, grades, boys, make up, and you get the idea.

“he best parts about Blue Reflection are the boss battles that take place in the field of the school.”

The best parts about Blue Reflection are the boss battles that take place in the field of the school. All the fragment collecting and training all amount to protecting the school from the impending doom of the Sephira. I must say that each boss looks awesome and has a unique style of attacks. During these fights, characters that you’ve helped will be able to assist you in battle. When a character launches an attacks, the support characters will be able to follow up with a separate action.

When it comes down it though, Blue Reflection is never really difficult, even in the boss battles. However, there will be a couple of battles in the later parts of the game the require some pacing, but the whole game is rather linear in story and battle, which could potentially make it approachable to players who don’t wish to spend hours of their time leveling up or learning deep systems.

Throughout your days at school, events between the girls will occur that take them to certain off site location. Each character can be invited to the movies or karaoke to learn more about them. Additionally, there are also swimming events and shower scenes (a lot of them) that make up some pretty interesting interaction between characters.

Since Gust is used to creating huge worlds, I can see they had fun creating just one school environment because it looks great. Each room is full of detail, which makes the first time exploring rather fun to see all the stuff scattered throughout the rooms. The Common is also nice, but as seen in Atelier games, each section is divided up so you’ll encounter a few loading screens if you’re trying to explore the areas.

The biggest downside of Blue Reflection is the lack of QA the game received. There are numerous typos that can be found throughout the game. On top of that one issue is seen almost every five minutes where the dialog box says to press “X: Settings”, when it’s clearly supposed to say “X: Select”. This is a drag because the story is the biggest highlight of Blue Reflection and one of the main reasons I stuck with it.

The character growth seen in Hinako and in her friends is the main theme in Blue Reflection. Constantly she is being haunted with losing the ability to do what she loves the most, but most put those issues aside to help her friends. I enjoyed seeing how her personality altered from the early parts of the game and how she dealt with some of the mistakes she meant. The story does well with bringing up past encounters and telling a solid story.

“There’s a lot to see in Blue Reflection if players put the time into the story….”

Blue Reflection is very much a visual novel with RPG elements where the player is able accept missions on the side to break up the story sections of the game. The battle system is great and I hope to see Gust play with it in future releases, but it’s just not really needed in the game. Interactions between characters are meaningful and don’t overstay their welcome as this game isn’t that long and can be beat in around 20 hours or maybe less if the player doesn’t do the optional quests.

Blue Reflection tells an accurate story of a high school girl who is coming to terms with becoming a magical girl. The game is graphically one of the best looking games from Gust that I have played and I applaud them for trying something new. There’s a lot to see in Blue Reflection if players put the time into the story, but if you’re looking level grinding and item collecting, this isn’t going to be the game for you.