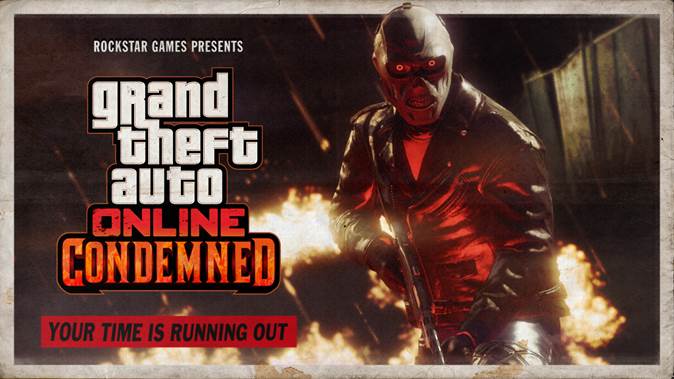 This year marks the fourth anniversary of Grand Theft Auto Online. To celebrate, Rockstar Games is offering discounts on several properties and vehicles, holding a big giveaway, as well as debuting a “nightmarish” new Adversary Mode just in time for Halloween.

According to the press release, now until November 6, players who complete Smuggler’s Sell Missions as well as try out the new Adversary Mode, Condemned will receive double GTA$ and RP. Much like a battle royale-type mode, Condemned marks one unfortunate player with impending death; once the timer runs out, they’re out of the match, unless they pass the curse onto somebody else by killing them before time runs out; the last man standing wins the game.

Aside from earning some extra GTA$ and RP, to commemorate the game’s milestone, the developer is giving away GTA$400,000 to every player who logs into Grand Theft Auto Online now until November 6. Players who log in during that time will receive the payout via their Maze Bank account sometime between November 6 and November 13.

The latest update also introduces a new vehicle called the Vigilante. This automobile is equipped with rocket propulsion technology as well as front-mounted machine guns (with the option to upgrade it to a missile launcher).On top of that, you can give the Vigilante a spin in the new Transform Race Inferno, and Transform Races bonuses until Monday, October 30.

Lastly, Rockstar is offering a ton of discounts on several vehicles until October 30. Players can save 30% off a whole bunch of properties and automobiles. Check out the full list above and below: