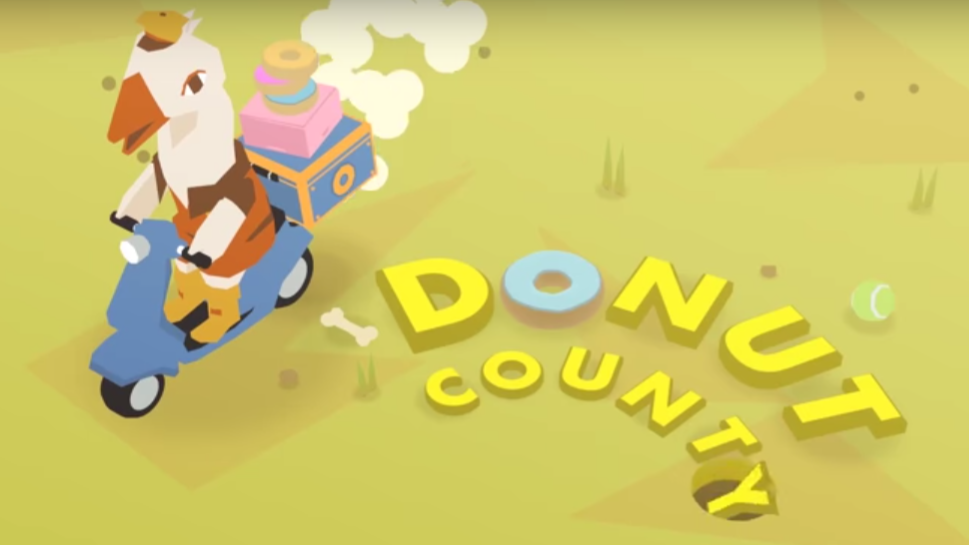 Donut County is the next project by one-man independent developer Ben Esposito, who has previously worked as a level designer and consultant for What Remains of Edith Finch and The Unfinished Swan. Esposito’s game was originally revealed three years ago, and it has since resurfaced under publisher Annapurna Interactive. At PAX 2017, we took a journey into Donut County‘s demo. There we found a simple, charming, and hilarious game.

From the information that I gleaned off of the demo, Donut County has a few main characters. We’re first introduced to Mira, a teenager who is friends with BK the raccoon, who happens to be another main character. The third main character, and really the only one that the player controls, is a mysterious hole in the ground that is swallowing Donut County piece by piece.

The demo begins with Mira and BK texting each other. Mira’s lounging at home lamenting to BK that there’s someone outside making quite the racket. BK assures her not to worry about it. He’ll fix the problem.

The subsequent scene, you find the source of Mira’s displeasure is a duck riding around on his moped stocked with donuts. A hole suddenly appears in the scene and you’re encouraged to move it around, swallowing objects around this duck. The more your hole swallows, the bigger it gets until it’s eventually big enough to swallow the duck and his entire moped of donuts. And like that, Mira’s problem goes away.

Based on the demo, it’s somewhat of a mystery as to how the hole appears, but it seems that BK is somehow its source. After this initial level with the poor moped-driving duck, we see many days into the future where much of Donut County’s residents, including BK and Mira, have become swallowed by the hole and are now stuck camping far beneath the surface. When the cast of characters begins to wonder about the identity of the hole culprit, Mira believes she has a prime suspect.

It’s at this point where Donut County began to draw me in. The interrogation that ensues over BK is frankly hilarious. Although no one knows how he did it, everyone begins to link him to the bizarre circumstances of when they encountered the hole. BK stubbornly tries to change the subject and inform everyone about he has been wronged by completely separate events. I honestly can’t do the dialogue justice. Something about this raccoon’s blatant denial of mounting evidence really tickled me and made the rest of the experience a joy.

Donut County really has a commitment to its sense of humor even in its gameplay. My demo consisted of about three stages of dumping more and more stuff into this hole: boulders, pottery, snakes, people, and even entire buildings. The more your hole can swallow, the more that it can fit, and that element creates a puzzle aspect to Donut County.

Admittedly, beginning with small objects to fit into the hole and working up to larger ones is a very simple puzzle to solve. However, Donut County finds ways of mixing it up even in its beginning stages. One stage asked that I swallow a number of snakes with the hole, but upon swallowing them they would clog the hole and prevent other object from going down it. I soon found that these rigid snakes poking out of the hole could be used to alter the environment via ramming them into other things, thus furthering my goals of mass destruction and consumption.

I feel confident that my experience with the snake stage is only the beginning of the complexities Donut County can offer. However, I wouldn’t want to have it become too complicated. After all, its simplicity is part of its charm. Moving the hole around environments and swallowing everything in sight has almost a zen-like quality that I wouldn’t want the game to lose just to amp up the challenge.

Also a simple, yet satisfying element of Donut County is its art style. With its soft pastel color palette and flat, polygonal models, it doesn’t demand attention but it compliments the game well and is worth note.

After about 20 minutes with Donut County, it feels like it’s shaping up to be a simple yet pleasant adventure. The gameplay is hardly groundbreaking, but it doesn’t feel like it needs to be. The game knows that its simplicity is enjoyable. It also happens to be pretty damn funny, and that goes a long way in my book.