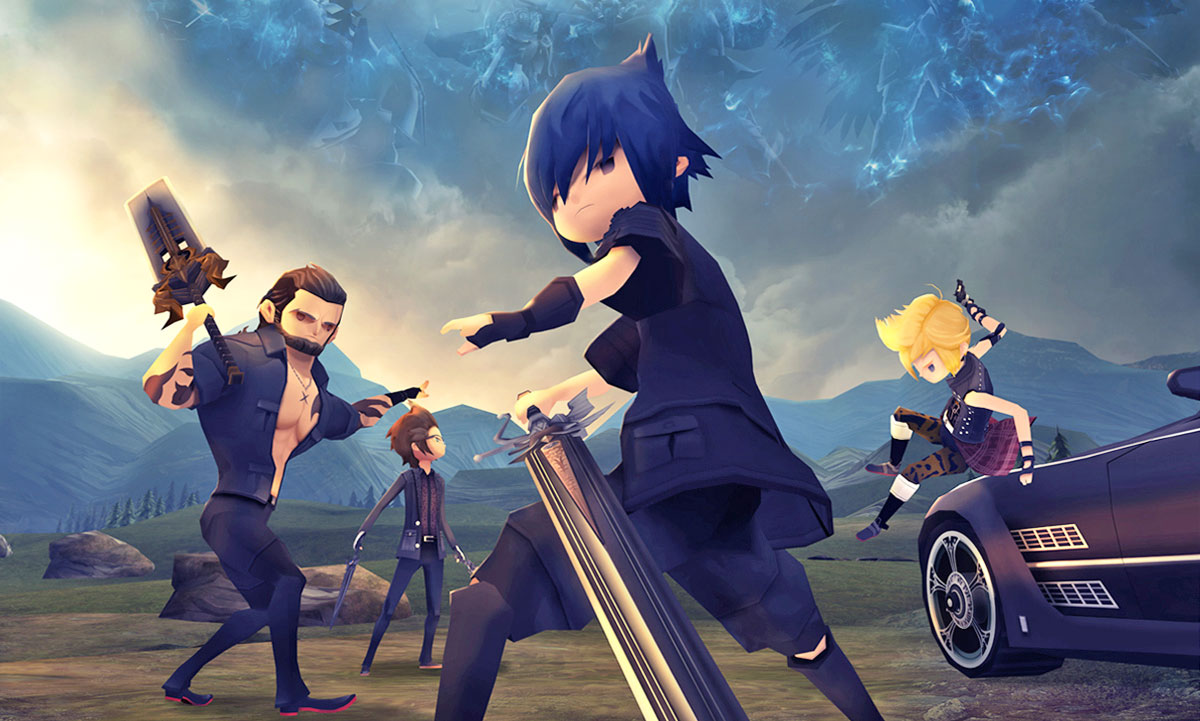 It’s no secret that Final Fantasy XV is a beloved title at DualShockers among both the staff and our readers, and though we are coming up on almost a year since it released after a decade plus in development, the next few months will provide even more ways to experience the grand RPG for two vastly different groups of players.

During New York Comic Con this weekend, we had the chance to check out demos on the show floor for both of the upcoming new iterations of Final Fantasy XV: the mobile-friendly “Pocket Edition” coming later this year, and the upcoming “Windows Edition” heading to PC early next year.

“Final Fantasy XV: Pocket Edition actually does an admirable job of capturing the grand adventure from its console big brothers.”

I started out with Final Fantasy XV: Pocket Edition on an iPad Pro, and as seen in the reveal trailer released previously, there is as much to look forward to in the shrunken down version of last year’s acclaimed RPG as there might have been initial trepidation towards playing it, given its release on mobile devices. However from the brief time that I played the Pocket Edition, I’d say that there’s actually quite a lot to look forward to from the mobile release of Final Fantasy XV, especially coming from someone that barely touches most mobile games at this point.

It’s easy to be cynical about mobile releases in the age of microtransactions and in-app purchases, but Final Fantasy XV: Pocket Edition actually does an admirable job of capturing the grand adventure from its console big brothers. The Pocket Edition from what we played is, more or less, the experience that console players got from the RPG last year, but with a few differences tailored more specifically towards a mobile-friendly format.

“The new visual style feels perfect for mobile and makes the experience just as charming as the console edition of the game.”

The biggest of these differences come from the visuals, which exchanges the photo-realistic vistas and detailed character models of Final Fantasy XV for a more stylized aesthetic, turning the characters into cute “chibis” (looking a fair bit like the characters from Final Fantasy Theaterhythm). The new visual style feels perfect for mobile and makes the experience just as charming as the console edition of the game, especially given the dialogue and back-and-forth between the various members of your party (with the original game’s voice acting intact). The one thing I’ll say is that the characters’ lack of moving mouths took some getting used to, but the game’s visual style is easy to appreciate, especially on larger screens like the iPad Pro I was playing on.

While the visuals might be a drastic change from the original release, Final Fantasy XV: Pocket Edition translates its gameplay into a simplified fashion for phones quite well. Moving around the maps is as easy as simply tapping on the screen (or holding down on the screen to move Noctis wherever you’d like), and equipping items or unlocking abilities feels easy with the touch screen.

“While the combat is much simpler this time around, it doesn’t lose the exciting, epic nature of the fights from the console versions.”

Combat is where the demo showed some additional changes from Final Fantasy XV, and while the combat is much simpler this time around, it doesn’t lose the exciting, epic nature of the fights from the console versions. Simply tapping on an enemy will move Noctis over to begin automatically attacking it, and special attacks from Ignis/Prompto/Gladiolus can be utilized when on-screen prompts are tapped at certain times. Likewise, players can dodge or counter incoming attacks with specially-timed buttons on-screen, adding more dynamic elements to the combat.

While these changes are notable departures from the experience that players got last year, really the most striking quality of the mobile port was how the Pocket Edition felt like Final Fantasy XV. While I only played the demo for maybe about 15-20 minutes total, I still got to experience a lot of the beats that I fondly remember from my time with Final Fantasy XV, including pushing the boys’ car at the beginning, eliminating desert pests for Cindy and Cid, and taking on a massive boss later on in the demo.

“I came away from playing Pocket Edition with appreciation more than anything else that [the Pocket Edition is] actually bringing a game as grand as Final Fantasy XV to portable devices.”

There is still plenty remaining to be seen from the Pocket Edition of Final Fantasy XV: the structure of its 10 episodes and how it will translate the story beats especially is intriguing. However, I came away from playing Pocket Edition with appreciation more than anything else that it’s actually bringing a game as grand as Final Fantasy XV to portable devices, and hope the final experience has me ready to jump back into the Regalia again.

“Final Fantasy XV was already a striking and gorgeous game, but the Windows Edition really lets its lush visuals shine even more.”

The second demo we played was of course for the upcoming Final Fantasy XV: Windows Edition, and while the demo experience was more-or-less the same game from last year, the enhanced graphical capabilities of the PC version are what really shined during the demo. Put into the starting areas of the game (along with the off-road Type-D Regalia), the crispness and color of the original game were more apparent than ever with what I played from the Windows Edition. Final Fantasy XV was already a striking and gorgeous game, but the Windows Edition really lets its lush visuals shine even more.

The one caveat that I should point out is that our demo was locked to 30fps, and while that means we couldn’t really get the full capabilities of what the game’s PC version might have to offer performance-wise, the demo still gave us a good indication that those wanting the best out of Final Fantasy XV can get that with the Windows Edition.

Though the huge landscapes and character models look especially good in the Windows Edition, what really captured my attention were the smaller details that the PC version of Final Fantasy XV was able to highlight. The new NVIDIA TurfEffects grass simulation effects in particular were what grabbed me most, as it allowed the massive landscapes of Final Fantasy XV to come alive even more. This was also apparent when taking the Regalia Type-D out into the open wilderness, as I rushed past trees swaying in the wind or saw strikingly-detailed creatures whiz past me.

“What really captured my attention were the smaller details that the PC version of Final Fantasy XV was able to highlight.”

Final Fantasy XV gave players (most) of what they wanted last year when it released on PS4 and Xbox One, but those that either missed out on the title or were waiting for the (eventual) PC release seem like they will get great experiences from both of the game’s upcoming new versions. The Windows Edition is certainly what I expected, and it made an already stunning game look even more vibrant and alive on-screen, which I’m sure will please those looking to put their gaming rigs to the test.

However, the Pocket Edition really caught me by surprise, and seems like it will be a remarkable faithful adaptation of the game for mobile audiences. Given that I’ve only been able to put maybe 5-10 hours into Final Fantasy XV on PS4, I’m definitely considering my options when it comes to the Pocket Edition of FFXV, and would gladly take Noctis, Ignis, Prompto, and Gladiolus wherever I go.