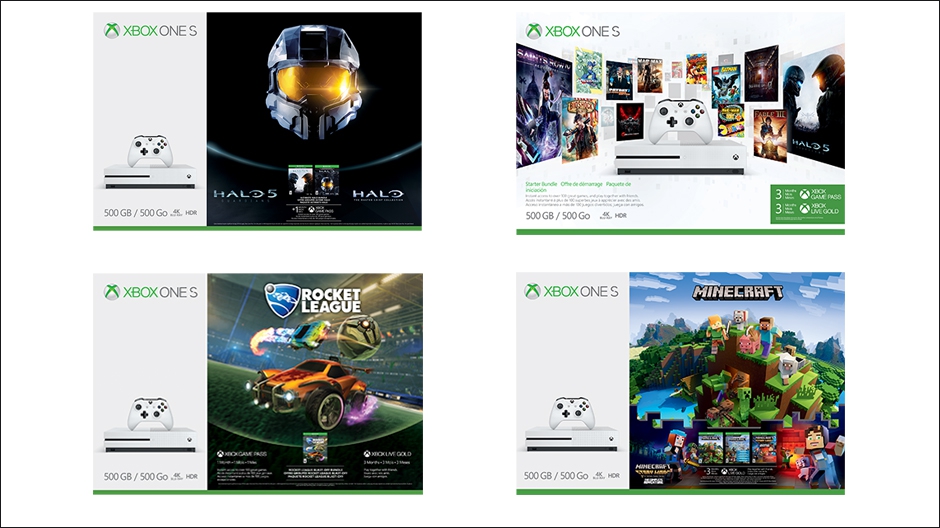 It’s that time of the year. Whether you’re buying presents for your brother, sister, mother, and father or making that Amazon wish list, holiday gift ideas are on your mind. Microsoft is here to make that decision easier with four new 500GB Xbox One S bundles featuring some of the console’s most popular titles. Each will cost $279/£229/€279 depending on the region you are from.

The Xbox One S Minecraft Complete Adventure Bundle includes the aforementioned console, an Xbox wireless controller, full-game download codes for Minecraft and Minecraft: Story Mode Season 1 — The Complete Adventure, a full add-on download code for Minecraft Explorer’s pack, and 3 months of Xbox Live Gold and 1 month of Xbox Game Pass. All Xbox One markets will receive the bundle save for Russia, China, India, Japan, Argentina, Brazil, Turkey Denmark, Finland, Norway, and Sweden. It is definitely the bundle your younger siblings will be asking for.

The Xbox One S Rocket League Blast-Off Bundle will include the console,  a controller, an Xbox Live Gold subscription, and Xbox Game Pass, as well as a full-game download for Rocket League. This bundle will be available in all Xbox One markets except for the U.S., Canada, China, Hong Kong, India Singapore, Japan, Taiwan, Australia, New Zealand, South Korea, Hungary, Russia, Mexico, Argentina, Brazil, Chile, Belgium, and the Netherlands.

The Xbox One S Starter Bundle will include the 500GB Xbox One S console, a wireless controller, 3 months of Xbox Live Gold, and 3 Months of Xbox Game Pass. While it may not come with a game like the previous packages, it does come with two extra months of Microsoft’s game subscription service which include titles such as Halo 5: Guardians, Dirt Rally, and Dead Rising 3. It will be available in all markets except China, South Korea, India, Japan, Belgium, Denmark, Finland, Netherlands, Norway, Portugal, and Sweden.

Last, but certainly not least, is the Xbox One S Ultimate Halo Bundle. It will include the console and wireless controller, as well as full-game download codes for Halo 5: Guardians and Halo: The Master Chief Collection, a 14-day trial of Xbox Live Gold, and 1 month of Xbox Game Pass. The bundle will be available exclusively at Walmart stores across the U.S.

It was recently revealed that Microsoft would be releasing two Xbox One S bundles featuring the upcoming Ubisoft developed and published action-adventure title, Assassin’s Creed Origins.