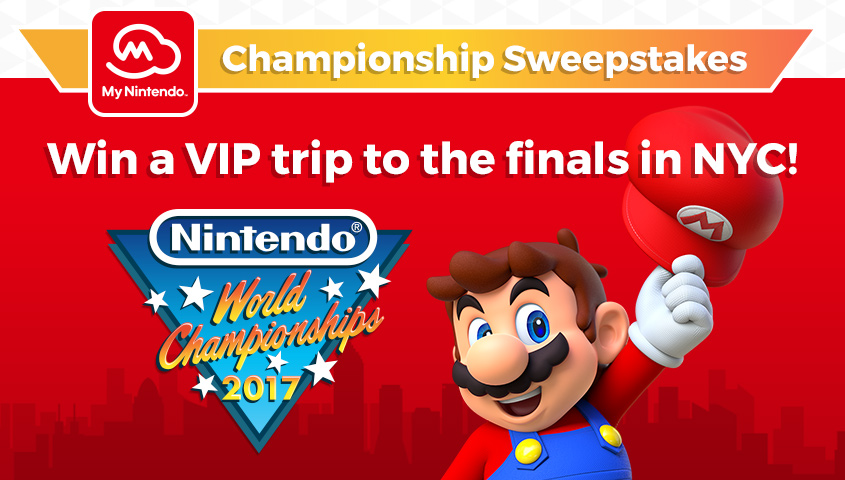 Last month, Nintendo revealed that the Nintendo World Championships would be happening again this October, over two years after the last one in 2015. Qualifying matches are currently going on around the US, and have players aiming for the best time in Mario Kart 7’s time trial matches.

Today, Nintendo launched a Sweepstakes through their My Nintendo program that will allow someone to win a VIP package that includes a trip for two day trip to New York City , and tickets to the Nintendo World Championships. According to Nintendo, all contestants must enter by 5 p.m PT on September 8, have to live in the United States or Canada (excluding Quebec), and be at least 13 years old.

Enter the #MyNintendo Championship Sweepstakes by 5pm PT on Sept. 8 for your chance to win a trip to #NWC2017! https://t.co/yhtslZysfi pic.twitter.com/ccQaDvmdnS

Entering the contest is pretty simple. If you are signed in to your My Nintendo account, you just have to go to this site and click the button to automatically be entered. After that, you just have to play the waiting game, and hope to get a response from Nintendo. Good luck to those that enter!

The Nintendo World Championships are currently set to return in October of this year. If you want more information on where and how to enter the Championship for yourself, you can chck out the event’s official page, straight from Nintendo.

Subarashiki Kono Sekai, The World Ends With You Sequel Possibly Teased By Square Enix Through Countdown
The Last of Us TV Series at HBO Greenlit, Production to Begin Soon
A Nuketown Easter Egg in Call of Duty: Black Ops Cold War Has Been Revealed Before The Map is Even Out
Call of Duty Black Ops Cold War Stands at Top of the UK Sales Chart in Its Second Week of Launch
Yakuza: Like a Dragon Sequel Rumor Confirmed False By Yakuza Series Producer