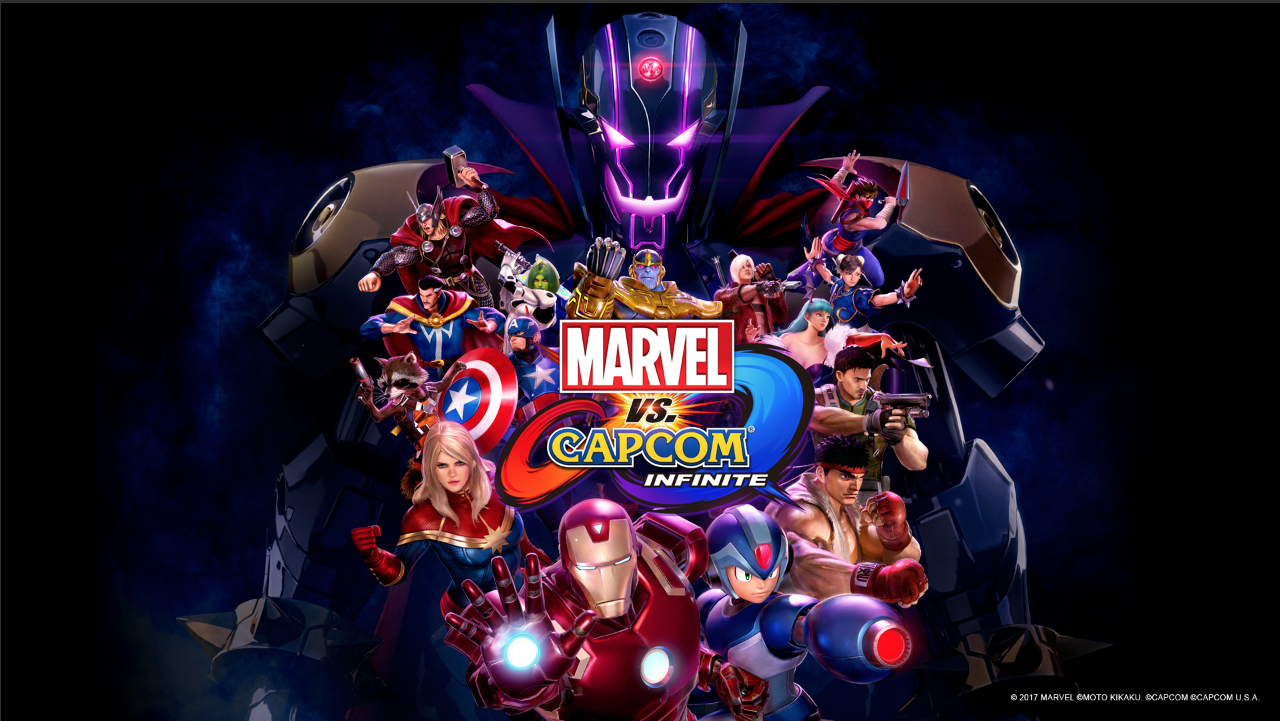 Wacky crossovers between two completely disparate worlds are far from uncommon when it comes to fighting games. While Nintendo fans have enjoyed Super Smash Bros. for over two decades, Street Fighter X Tekken brought together two of the fighting genre’s biggest franchises, and even PlayStation fans pitted mascot against mascot in PlayStation All-Stars Battle Royale, Marvel vs. Capcom has always reigned supreme as one of the ultimate fighting mashups. The series’ latest release, Marvel vs. Capcom: Infinite, continues to show the allure of bringing two worlds together with fast-paced fighting, but at the cost of some setbacks that might make it the series’ most divisive entry yet.

Marvel vs. Capcom: Infinite serves as the latest installment in the long-running fighting game series that defined the idea of a crossover fighter. Bringing together the worlds of Marvel’s comic book universe (or in this cast, basing it heavily on the Marvel Cinematic Universe) and Capcom’s league of extraordinary video game characters, Infinite continues the tradition of Marvel vs. Capcom‘s past by having two players compete in various superpowered fights. Mixing and matching characters from both sides of the playing field, the ultimate goal for players is to bring together large combos and attack strings to render your foe defenseless and knock them into oblivion.

“The series’ latest release, Marvel vs. Capcom: Infinite, continues to show the allure of bringing two worlds together with fast-paced fighting.”

The roster of characters especially is one of those aspects that will perhaps be looked at the most critically when it comes to the longterm evolution of Marvel vs. Capcom: Infinite. At launch, Infinite features a roster of 30 characters split between the Marvel and Capcom camps, respectively.

For longtime fans of the series, this represents the smallest roster for a Marvel vs. Capcom game yet, and while several other characters have been confirmed to be coming as post-launch DLC (such as Black Panther and Monster Hunter), it’s an admittedly small number of characters in a series that regularly featured over 50+ fighters to choose from.

“The loss of [the X-Men and Fantastic Four is] disappointing to say the least, and certainly removes a large amount of variety from the roster of characters.”

In particular, the most glaring omissions from the roster come from the lack of any X-Men or Fantastic Four characters, both franchises that have been a part of Marvel vs. Capcom since the series’ beginnings. While their exclusion from Infinite is largely due to the continuing legal disputes between Marvel and 20th Century Fox over movie rights to the respective characters and franchises, the loss of these series mainstays is one that’s disappointing to say the least, and certainly removes a large amount of variety from the roster of characters.

That said, there is still much to be offered from the characters that are present in Marvel vs. Capcom: Infinite, despite the fact that a vast majority of the roster is composed of returning characters from the previous games. Mainstays likes Iron Man, Captain America, and Ryu provide a stable of more well-rounded fighters for newer players to choose from.

“At its heart, Marvel vs. Capcom: Infinite is very much the hardcore fighting experience that fans have enjoyed for nearly two decades.”

The roster’s more eclectic picks like Frank West and Nathan Spencer, however, offer some specialized fighting styles for players that are willing to master them. Likewise, newcomers to the series like Captain Marvel, Mega Man X, and Darkstalkers‘ Jedah Dohma tie in perfectly to the series and offer some welcome new combat styles to explore.

At its heart, Marvel vs. Capcom: Infinite is very much the hardcore fighting experience that fans have enjoyed for nearly two decades. However, this time around there are some notable changes to the core mechanics, the biggest being that fights have dropped from the traditional 3v3 system to a 2v2 structure, and the implementation of the new “Infinity Stones” system.

“Character switching can be done more than once during combos, leading to some savage possibilities for players that really get to know the combo system inside and out.”

As the last two installments of Marvel vs. Capcom both iterated heavily on the idea of pitting three characters against three, the idea of reverting back to a 2v2 structure of the original Marvel vs. Capcom might make Infinite feel like a regression for the series rather than a step forward. In some cases, yes: some of the series’ hardcore fans might feel that way.

However, the 2v2 structure of Marvel vs. Capcom: Infinite actually presents some opportunities to expand on what the characters can do, and in a lot of ways Infinite feels like a refreshing enhancement to the tag-team style combat of the series. Notably, character switching can be done more than once during combos, leading to some savage possibilities for players that really get to know the combo system inside and out.

“While the Infinity Stones are definitely powerful, they’re fine-tuned just enough that they don’t feel cheap.”

Those possibilities extend further with the introduction of the Infinity Stones system, which brings the colored stones that have been crucial to the Marvel Cinematic Universe into the MvC experience. Specifically, each player chooses one of the six Infinity Stones that can be used mid-match to gain a strategic advantage. At lower levels on the players’ Infinity meter, the Infinity Stones’ effects provide a lesser effect that can give a nice boost if used at the right time (such as confining the player to a smaller portion of the battlefield), known as “Infinity Surges.”

However, saving up your Infinity meter for the higher-leveled “Infinity Storm” provides players with more drastic abilities that could turn the tide of a battle and give you the upper hand. These range from a rapidly-refilling Infinity meter from the Mind Stone, to more radical effects like the Soul Stone’s ability to bring a knocked-out character back into the fray. While the Infinity Stones are definitely powerful, they’re fine-tuned just enough that they don’t feel cheap, which is a credit to the great balance on display in Marvel vs. Capcom: Infinite.

“Marvel vs. Capcom: Infinite builds on the solid foundation of combat from its previous iterations, but perhaps its biggest sore spot are the visuals.”

Marvel vs. Capcom: Infinite builds on the solid foundation of combat from its previous iterations, but perhaps its biggest sore spot are the visuals. Much has been made of the game’s rough looks way before its release, and for the most part, it isn’t the visual trainwreck that I’m sure many were anticipating it to be before the release: quite the contrary. However, Marvel vs. Capcom: Infinite‘s problems are that is is visually inconsistent.

On the positive side, the fighting arenas’ backgrounds come to life with vivid detail as they cleverly mash-up the respective Marvel and Capcom universes, and where the game is clearly having some fun (especially when it comes to their names). These include the Black Panther and Monster Hunter crossover “Valkanda” and the Marvel and Resident Evil remix known as “AIMbrella,” and they live up to their hilariously-cheesy names. Seeing a massive Monster Hunter creature attack a Wakandan city in the background of an epic fight adds a nice dose of spectacle to the fighting at hand, and Marvel vs. Capcom: Infinite delivers on that.

“The fighting arenas’ backgrounds come to life with vivid detail as they cleverly mash-up the respective Marvel and Capcom universes.”

However, the character models are where the game is the most inconsistent visually, and much has been said already about some characters looking a bit rough around the edges since the game’s reveal last December. By and large, several characters have had some noticeable improvements in Marvel vs. Capcom: Infinite such as Chun Li, but the adoption of a more realistic graphical style (compared to Marvel vs. Capcom 3‘s more comic book-y appearance) definitely hurts more than helps some characters.

Characters like Rocket Raccoon, Iron Man, and Mega Man largely retain their iconic looks with little lost in translation. However, plenty of characters still look either outrageously misproportioned (such as an overly buff Captain America) or just a little bit “off.” This especially hurts for some characters like Dante (a personal favorite of mine), who looks like he hasn’t slept in four days after a wild, coke-fueled bender.

That said, Marvel vs. Capcom: Infinite has a lot to offer, for both fighting game enthusiasts and hardcore. The robust online modes provide plenty of options for fans looking to hone their skills against others competitively, while Arcade and Mission mode give opportunities for newcomers to dip their toes into the game’s more complex strategies. After seemingly learning its lesson from Street Fighter V, Marvel vs. Capcom: Infinite features a full-on Story Mode that brings players through (almost) the whole roster in a series of fights connected by a loose narrative.

The story is as absurd as you’d expect from a game bringing together Marvel and Capcom characters and trying to make it coherent, but the roughly three-hour long experience still has a lot of fun moments to enjoy, especially for newcomers to the series. In particular, I enjoyed getting to see Ryu and Hulk as a research duo, and to see Thor and Ghost ‘n Goblins‘ Arthur trade insults at one another was also highly entertaining.

“The story is as absurd as you’d expect from a game bringing together Marvel and Capcom characters and trying to make it coherent.”

Marvel vs. Capcom: Infinite tries admirably to make itself an accessible entry point for newcomers to the series (and fighting games as a whole) while retaining the deep levels of strategy and technicality that fighting game enthusiasts have enjoyed for nearly two decades. In light of that dedication to being deep but approachable, Marvel vs. Capcom: Infinite also bears the brunt of a visual style that lacks a lot of the personality and style that made the previous games such staples of the fighting genre, and that might turn some away from the treatment that their favorite characters have gotten on the latest generation of hardware.

Ultimately, we’ll have to see how Marvel vs. Capcom: Infinite develops as far as expanding its character roster with its (forthcoming) DLC, and how the hardcore community takes to the game after spending more time with it and learning its deeper mechanics. While it may not quite match the blend of style and substance that Marvel vs. Capcom 3 provided in the last generation, Marvel vs. Capcom: Infinite still provides an enjoyable romp with Earth’s (and video gaming’s) mightiest heroes, warts and all.