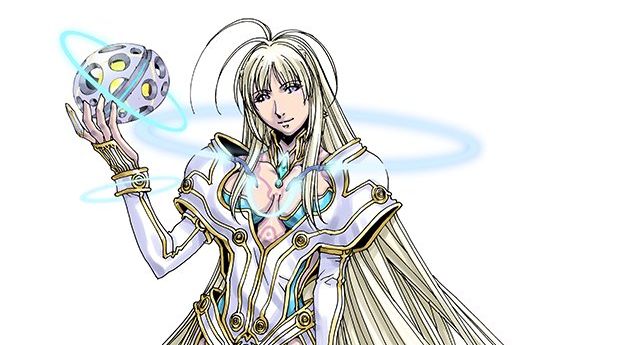 All right. Now Monolith Soft is just showing off. Today they revealed a new rare blade on the Xenoblade Chronicles 2 official Twitter account.

This time around we get to see Musubi in both artwork and video. She is a “goddess” blade with impressive healing abilities.

If you check out her artwork below, and you’re into manga, you’ll probably recognize who designed her. It’s Kia Asamiya, author of classics like Silent Möbius, Compiler and Martian Successor Nadesico.

Musubi is voiced by Miki Takahashi, who is known for Iris in Atelier Iris: Eternal Mana and Aisha in Genesis Climber MOSPEADA (one of the three anime series alongside Super Dimension Fortress Macross and Super Dimension Cavalry Southern Cross that the goons at Harmony Gold defaced in order to create that shameful mashup named Robotech).

You can check the artwork and video below. If you want to see more, you can also enjoy another batch of screenshots and videos from yesterday, more screenshots featuring the Argentum Trade Guild and its Boss, two characters designed by Tetsuya Nomura, one by Code Geass character designer Takahiro Kimura, one by  Takeshi Nogami, and one by  Boogiepop character designer Kouji Ogata. You can also watch some recent gameplay, and the latest trailer.

Can You Upgrade the DIE Shockwave in Cold War Outbreak? How Do You Upgrade it?
Apex Legends Server Maintenance – Times, Information and Availability
How to Get the Hop Rock Dualies in Fortnite?
TLOU2 Player Takes No Damage, Destroys Stalkers Using Only Fists
Halo 5 Xbox One X Enhanced Trailer