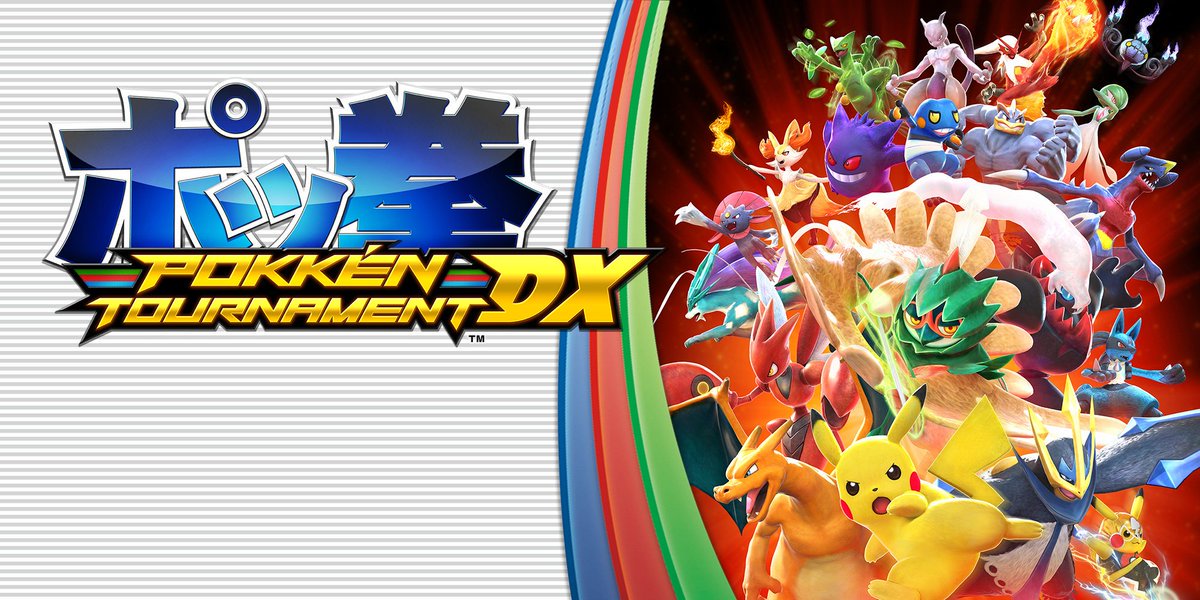 While the Wii U was an interesting console with quite a few awesome games on it, it is no secret that the system did not sell well. With an install base of only a little over 13.5 million, many Wii U games undersold and went largely unnoticed by many. Fortunately, Nintendo is giving some of these Wii U exclusives new life on their newest breakout console-handheld hybrid, the Nintendo Switch. Earlier this year they released Mario Kart 8 Deluxe, and they have now followed it up with Pokkén Tournament DX, the ultimate edition of one of the Wii U’s most interesting fighting games starring Pokémon.

Being on the Switch gives Pokkén Tournament DX much more visibility and the ability to be played anywhere with a variety of different control options. It also includes a few new modes and fighters, making it a worthy purchase for those who do not own it yet. Unfortunately, if you already played a ton of the game on Wii U like I have, this version isn’t really worth it unless you really want to try out one of the game’s new fighters.

“If you already played a ton of the game on Wii U like I have, this version isn’t really worth getting unless you really want to try out one of the game’s new fighters.”

As I mentioned before, Pokkén Tournament previously released on the Wii U back in March of 2016. DualShockers even reviewed the game then, giving it a lofty 9.0 due to the titles well-developed mechanics and modes, which that review delves into. For that reason, I will just give a brief overview of the game’s mechanics so I can focus on what’s new, as our thoughts on the base game still stand.

When a player’s Synergy Gauge is filled by pulling off attacks and getting special pickups that fall on each stage, they can enter Burst Mode and do more damage, and unleash a powerful Burst Attack. Players also have a small chance to counter with each attack to pull off a critical hit on their opponent, and can call on a Support Pokémon for special buffs and debuffs to turn the tide of battle. The first player who wins two rounds wins the match.

Pokkén Tournament DX’s mechanics are accessible to both new and old fighting game players, with the rock-paper-scissors and phase mechanics adding some extra flair for more storied fighting game veterans. Many of each Pokémon’s attacks are based off of some existing attack from the Pokémon series, and it was always fun for me to guess what each attack was and then check in said Pokémon’s move list. Many of the fighters function quite differently too. While the original game had 16 fighters, this one has 21, plus a new pair of support Pokémon.

Pokkén Tournament DX introduces five new fighters to the game: Decidueye, Empoleon, Scizor, Croagunk, and Darkrai. While Decidueye is exclusive to Pokkén Tournament DX, the other four were present in the arcade version, being added in the months after the Wii U version launched.

These latter four Pokémon could’ve worked as DLC in the Wii U version of the game, but they will be forever locked in the Switch version due to the Wii U’s poor sales, which is unfortunate. If you really want to check out these new fighters, Pokkén Tournament DX is worth picking up, it is just a shame Wii U players don’t even have the option of purchasing these fighters.

“While Scizor is the only one who Mega Evolves during Burst Mode, the other Pokemon still manage to have interesting and flashy Burst Attacks that make them all fun to use.”

The biggest reason for that grievance is that these new Pokémon are all very fun to use. Empoleon quickly became my favorite large, heavy hitting attacker, and Croagunk is now my go-to option if I want to play a small, glass cannon fighter, though I will admit its inclusion is a weird choice because Coragunk is already a support Pokémon.

While Darkrai felt a bit too floaty and technical for my tastes, I still had fun occasionally playing Scizor and Decidueye, who are more fast-paced fighters and quickly drain one’s HP bar if they aren’t playing attention. While Scizor is the only one who Mega Evolves during Burst Mode, the other Pokemon still manage to have interesting and flashy Burst Attacks that make them all fun to use.

While Pokkén Tournament DX’s lineup of 21 Pokémon may seem a little random considering the large pool the developers had to choose from, they all end up transitioning well into the fighting game genre. The five new fighters introduced here are quite interesting, and while these fighters don’t do anything that couldn’t be done in the Wii U version of the game, they are still very engaging.

Meanwhile, only one new support pair of Pokémon has been added in Pokkén Tournament DX: Litten and Popplio. Litten can use Fire Fang to pull off a charging attack that deals more damage when one’s HP is lowered, and Popplio can use Bubble Beam to increase players attacks and give them a double jump. Their inclusion is pretty minute, and they are overshadowed by better support pairs such as Yveltal and Latios. They aren’t bad, just forgettable; Pokkén Tournament DX would have benefited from adding a few more new pairs of support Pokémon to the mix.

Pokkén Tournament DX’s online features have also been fleshed out a bit more to create an online experience closer to other fighting games. Group Match lets players create a private lobby for friends and find players of a similar skill level to fight. You are also able to see the ranking of individual group members. While the number of people online pre-release was pretty scarce, matches still ran well and I can see that Group Match will be a great way to foster little communities around the game.

Players can also now view replays of online battles, and check their inputs during battle in order to see what they could do better. While some might say that these more standard features should have been present in the original, I’m just glad their inclusion here means Pokkén Tournament DX’s online experience is fully fleshed out, and could create the Nintendo Switch’s first true online fighting game community.

“Daily Challenges gives players a reason to return to Pokkén Tournament DX, and can expose people to other fighters that they may have ignored up until that point.”

Two new modes have also been added to the lineup in Pokkén Tournament DX. Team Battle is pretty simple in setup, pitting two teams of three Pokémon against each other. Players can choose in what order they want to send in their Pokémon, and win if they are able to knock all three of their opponents Pokémon out. Team Battle is a interesting mode that encourages players to branch out and try fighting with new Pokémon, but I didn’t find it to be much of a substantial addition to the base game.

While both of these new modes are fun, neither feels like a substantial boost to the base game, like the revamped Battle Mode was for Mario Kart 8 Deluxe. For the most part, sans the new fighters and online features, the meat of the game is mostly the same as the Wii U version. Pokkén Tournament DX does have one interesting difference from the Wii U version though: you can play it anywhere.

The Nintendo Switch’s out-of-box portability is automatically a great addition to many games, and for the most part, the same can apply to Pokkén Tournament DX. It felt great to be able to take the game anywhere and knock out a few matches during a car ride. The game looks good in handheld mode, and didn’t drain the system’s battery that much, which makes longer on-the-go sessions possible. This also means that two players can face off against each other anywhere, which is neat for a fighting game, but also highlights a problem with the game’s controls.

Playing with both Joy-Cons attached to the Switch felt fine, even if it feels the best when playing on a Pro Controller or with the Joy-Con grip. If you want to fight someone else locally though, you are encouraged to each use the individual Joy-Cons. As you can see in the image below, using each individual Joy-Con’s controls gets pretty cramped, which is not preferable for a fighting game. While Pokkén Tournament DX is more simple than many fighting games, playing on such a small controller wasn’t fun.

It was neat being able to face off against friends anywhere, but the controls will also compromise the experience for both players. If you are facing off against friends, you are better off bringing a Pro Controller and Joy-Con Grip with. I ultimately think this might hurt fighting games on the Switch in a long run, as the individual Joy-Cons don’t lend themselves as well to more complicated controls, and takes away from one of Pokkén Tournament DX’s biggest selling points.

“If you missed Pokkén Tournament on Wii U and are a fan of fighting games, I highly recommend it, as it is easy to get into and brings some interesting changes to genre.”

Pokkén Tournament DX is a very solid fighting game that has now exposed itself to a more active audience on Nintendo Switch that may have missed it on Wii U. Unfortunately, while the few new modes and fighters added are entertaining, they don’t really warrant another $60 purchase for those who already own the game unless they are very interested in one of the five new fighters that unfortunately never came to the Wii U version.

The Joy-Cons themselves can also be uncomfortable to use and take away from “play with anyone, anywhere” vibe that this game has going for it at face value. If you missed Pokkén Tournament on Wii U and are a fan of fighting games, I highly recommend it, as it is easy to get into and brings some interesting changes to genre. That being said, it really isn’t worth double-dipping with Pokkén Tournament DX, as this version doesn’t add too much to the core experience outside of a couple new fighters.