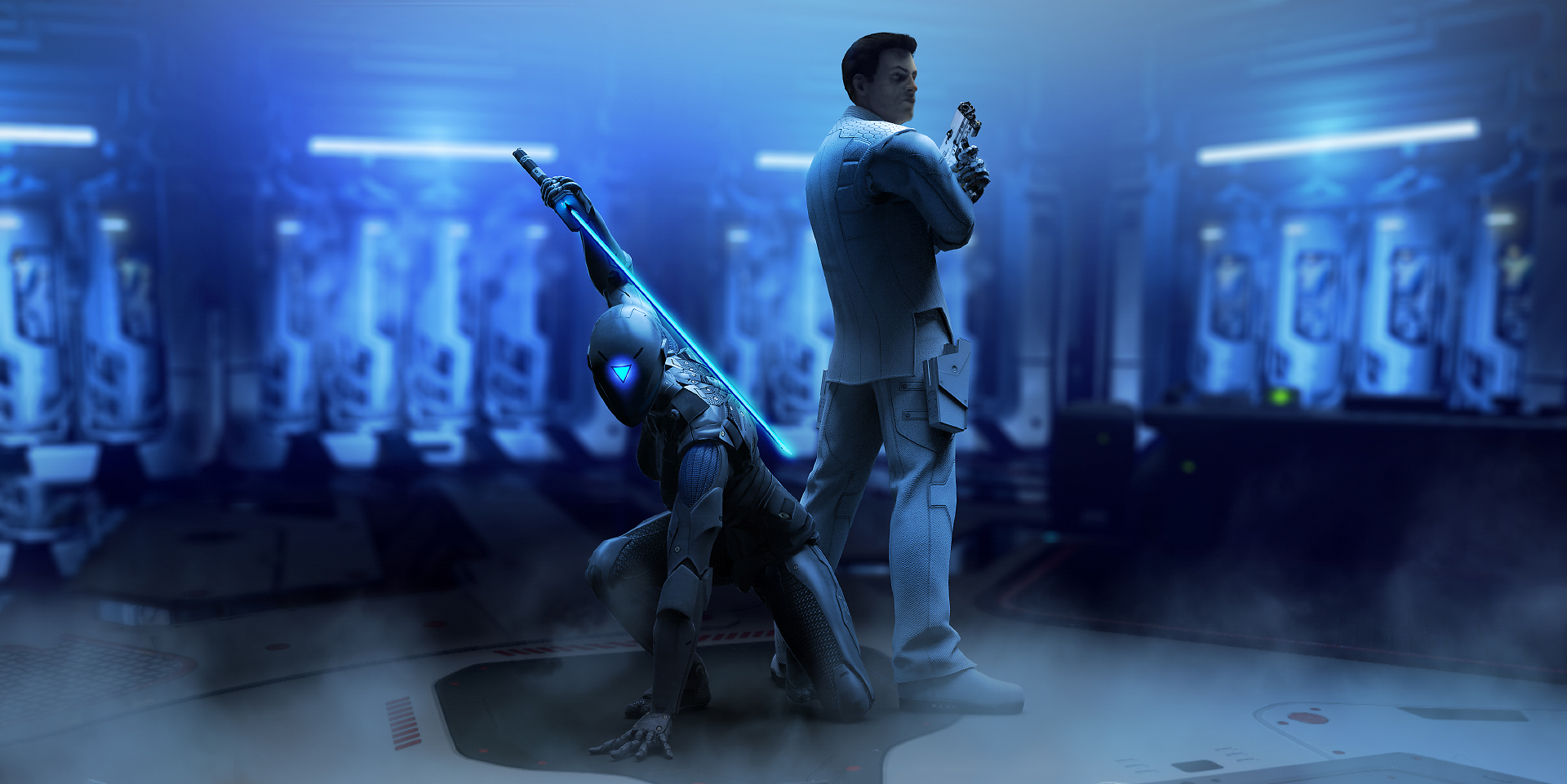 In July of 2016, American virtual reality studio Survios released its first co-op VR shooter Raw Data for the HTC Vive as an Early Access title on Steam. After nearly a year of rigorous development and testing, the critically-acclaimed title is finally exiting out of early access.

This fast-paced co-op action VR game will launch on October 5 for HTC Vive and Oculus Rift while PlayStation VR owners will get their hands on the game five days later on October 10. Prior to the game’s official release date DualShockers had the opportunity to speak with Raw Data‘s composer Jeremy Tisser.

Taylor: How does it feel to be credited as a composer on what is arguably one of the best VR shooters in recent years?

Jeremy Tisser: Honestly, it’s pretty surreal! Two years ago, I received a call from my good friend James (Iliff) about writing the music to this 10 minute VR demo his company was making.

I knew they’d been working on it for a while, and since I had made the music to Zombies On The Holodeck for James, I knew it was going to be something special, primarily since the basic concept derived from Zombies. At the time, I knew they were on to something, but I had no clue what was coming next! Everywhere I go, people have either heard of or played Raw Data!

“I love the concept of “world-building,” and there are so much more opportunities for that in games than there are in a film.”

T: What piqued your interest to compose music in the gaming industry?

JT: I love the concept of “world-building,” and there are so much more opportunities for that in games than there are in a film. With film, you’re locked to whatever is happening on the screen at that exact moment in time. Sure, you can foreshadow what’s coming, reference the past, describe the subtext of the scene, but you’re still limited to this very moment in time that the audience is seeing.

With games, you’re creating a world that is ever changing! The player moves around an area, can decide his/her destiny, and it grows organically. The music needs to be able to adapt constantly and change while a player is moving in real time. But going back to the concept of “world-building,” since you’re not locked to picture, you have way more creative freedom to push the musical boundaries! There’s more room for experimentation with sounds, colors, themes, musical styles, etc.

T: I understand you have a Master in Fine Arts, background with metal music as well as a film enthusiast. How has your experience assisted in the process of creating Raw Data’s soundtrack?

JT: I’d say that the various areas of my background helped with crafting the sound of Raw Data. In the beginning, James and I sat down together, and we spent around two hours listening to various sci-fi film scores from the 70s to the early 00s. We listened to everything from Independence Day to Total Recall to War of the Worlds, and we said to ourselves “what was it that made those scores so special?” We decided that it was in the orchestration and the melodies.

“Raw Data gave me the opportunity to write the sci-fi score of my dreams.”

So I spent a lot of time crafting my orchestrations and choosing different instruments to add to the orchestra that could make Raw Data stand on its own two feet. We have everything from the Blaster Beam from Star Trek the Motion Picture, to electric guitar metal-style solos, an Aztec death whistle (also known as ehecatl), didgeridoo, industrial elements turned into percussion instruments (like gears, oil drums, chains, etc.). Shakuhachi flute, taiko drums, tabla drums, frame drums, and more, all on top of the traditional orchestra.

Raw Data gave me the opportunity to write the sci-fi score of my dreams, utilizing every bit of my training from crazy poly-rhythms to metal guitar riffs, and there’s a ton of thematic material as well.

T: Based on your experience, which form of media would you say is easier to compose for?

JT: Mobile games are the easiest for sure. At most, I’ve had to write five or six minutes of music. There’s usually a ton of freedom to write what you want to write, and the schedule is very laid back. At least, for me it was. I had about two months to write 5 minutes of music.

But if you’re comparing big video projects like Raw Data to feature films or television, I’d say that no single one is more difficult, as they all have their limitations. In the movie, you’ve got 6-8 weeks to deliver whatever score is required, including any recording and mixing, and you have to sync your music to whatever is happening on screen at that very moment.

In television, you’ve usually got five or so days to deliver anywhere from 15-30 minutes of music. Video games may give you an entire year or two to write two hours of music, which seems like a fantastic advantage. The issue is, however, that with more time, the music is more intricate.

You’re exercising parts of the brain that don’t always get used when you’re on “autopilot” with a film or television show. Also, the music has to be able to loop seamlessly without anyone knowing, and it has to be interactive and be able to change naturally with the player’s movements. Each medium presents its own set of unique challenges.

“Survios has been the most supportive company I’ve ever had the privilege of working with.”

T: What, if any assets did Survios provided to help you compose the original soundtrack for Raw Data?

JT: Survios has been so incredibly generous! They allowed me to take so many risks with this score, as well as push all the musical boundaries of science fiction. As I mentioned earlier, they allowed me to experiment with so many different kinds of instruments from all over the world, almost without question.

I’d bring up some musical style or tool in our meeting, then play them an example of what it sounds like, and they almost always would say “hell ya! Do that!” So then I’d go off and write it, record it if necessary, and present it! Survios has been the most supportive company I’ve ever had the privilege of working with, and I sincerely hope they know how grateful I am for it.

T: What was your biggest inspiration when creating Raw Data’s soundtrack?

JT: My biggest inspiration for this one would have to be Jerry Goldsmith. His rhythmic writing, complex meter changes, and his unique orchestrations were significant influences for me. If I can deliver a score that’s even a quarter as good as his, then I’ll be a happy man!

“It was sort of like a spotting session for a film, except it was different because we genuinely had to immerse the player into this world.”

T: Was there any different approaches you had to take when composing music for a VR game?

JT: Actually yes. Typically, I would have game-play footage in front of me, or a video to write music to, or a screenplay that I was locked into or something. But this was different. I had a standing meeting every two weeks at their offices, where I would get to play the newest level, or the previous level with whatever changes were made, artwork created, etc.

Once I took the headset off, I’d go into the conference room to meet with James, and I’d write down what that level made me feel like. We’d talk about the level’s landscape and scenery, the location of the standard within Eden Tower, the pacing we wanted, the emotions we wanted. It was sort of like a spotting session for a film, except it was different because we genuinely had to immerse the player into this world.

T: Are all the original ideas and concepts you had featured in the final version of the soundtrack?

JT: Yes they are! And actually, much of the time when I’d present the music to James, he would say “Can we add more? Can we go bigger with this? Can we pound the rhythm?” So I got to push my original ideas even further!

I only had to pull back just a couple of times, and usually, it was just to balance the various elements of the score a little differently, but it never took away from the original concept.

T: What would you say was the most difficult part of composing music for Raw Data?

JT: I’d say the hardest part was creating unique sound scores for the various locations of Eden Tower, while still making sure that the score as a whole remains cohesive. For example, the Data Chamber is a big vast room, deep within Eden Tower. It’s dark and terrifying. The music for that needed to feel dark, brooding, terrifying.

However, when you go to a Skyport level on top of Eden Tower, it’s almost like a sci-fi urban jungle, with giant cranes spinning, storage containers being moved, packages being airdropped, drones flying around you. We needed something a little more fast paced and heart pounding, while still evoking the feeling of looking at the top of Eden Tower and seeing this endless rooftop filled with modern hardware and machinery.

Then, you’ve got the Botanical Gardens. There were so many different types of levels that played their role in telling the story of Raw Data, and we needed that to be reflected in the music, but everything still needed to tie together. That was certainly the most challenging aspect.

“There are also some more VR things coming down the pipeline from various places, but I can’t talk about those just yet.”

T: Out of all the tracks you created in Raw Data which is your favorite score and why?

JT: I would probably have to say the boss level music is my favorite. I don’t want to give anything away, but I will say this. My dear friend AJ Minette (The Human Abstract) returns to play the guitar melody, as well as rhythm guitar and bass part.

On top of that, I played drums on these tracks; I had the opportunity with these tracks to combine my love for orchestra with my passion for metal and go to town playing the central theme.

T: What are your plans for the future?

JT: Right now, I’m writing a screenplay along with my wife for a new television series, and I’m also getting ready to score my good friend and talented director Marcus Mizelle’s third feature film, Chameleon. This is our second collaboration together, so I’m very excited to get started.

There are also some more VR things coming down the pipeline from various places, but I can’t talk about those just yet. Other than that, keeping up with my martial arts training at the Shaolin Martial Arts Center in Los Angeles, and enjoying life with my beautiful wife. In the meantime, I hope you enjoy the score for Raw Data, two years in the making!