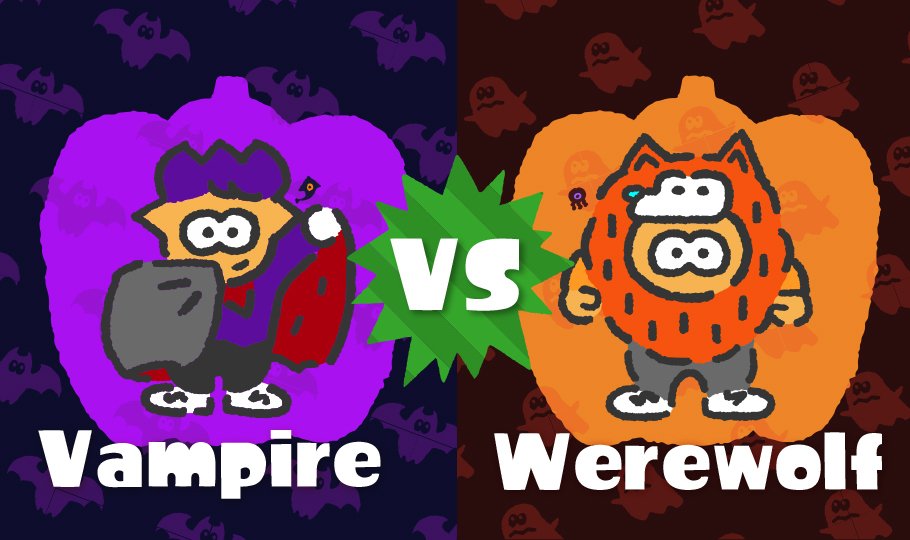 If you’ve been eager to learn about the latest Splatfest then your wait is over. Today the House of Mario announced that the next Splatoon 2 event for North American players will be Halloween-themed, as it tasks players with choosing between Vampires or Werewolf.

I for one am disappointed that we won’t be getting the European version of the event, which saw players choose between two different toilet paper arrangements: front or back. That edition will be starting tomorrow in Europe. Other previous Splatfest competitions included Cake vs. Ice Cream, Mayo vs. Ketchup, and Flight vs. Invisibility. Ice Cream, Mayo, and Flight all won in their respective competitions.

In other Splatoon 2 news, during a Nintendo Direct back in September, it was revealed that maps and weapons would be coming to the game soon, with Kelp Dome already released, and Snapper Canal being added today.

Splatoon 2 was originally released on July 21, 2017, and is available exclusively on the Nintendo Switch. Personally, I’ll be siding with the Vampires, mainly because they are creepier. Who are you siding with? Let us know below.

A spooky #Splatoon2 #Splatfest is coming! Are you #TeamVampire or #TeamWerewolf? Get ready to splat October 13th at 9pm PT! pic.twitter.com/SV9ovpwEYU