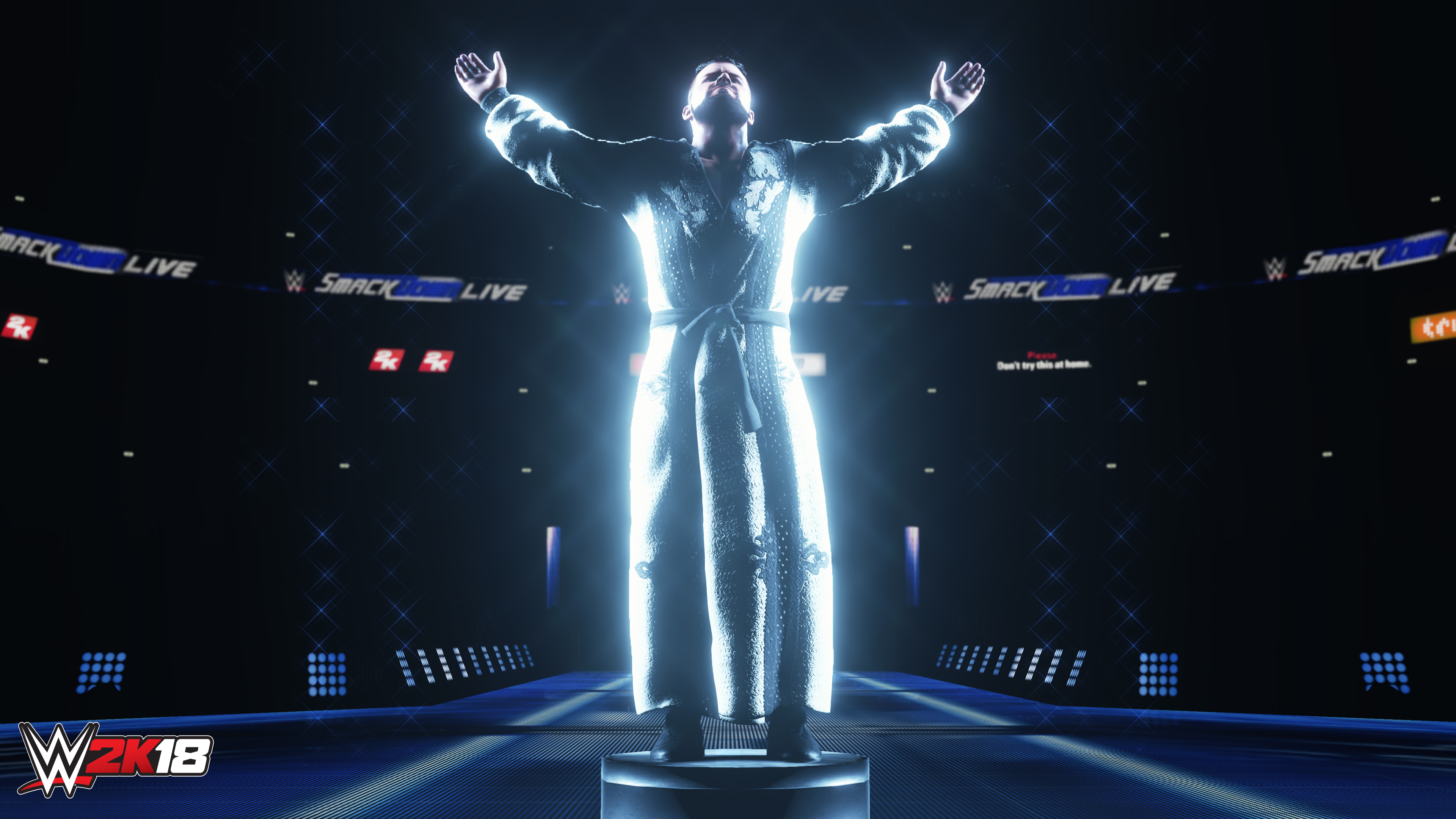 My adoration for the WWE and the world of professional wrestling is a new found passion that has taken control of my life. Since I watched my first Wrestlemania two years ago — yes, the one where Seth Rollins cashes in his Money in the Bank contract to win the WWE Championship — I have watched Monday Night Raw, SmackDown Live, NXT, and all of the pay-per-views and special events in between. When I inevitably watched all the current programming for the WWE, I picked up 2K Games’ 2015 wrestling title, WWE 2K16.

Although the game flaunted some questionable gameplay mechanisms, its MyCareer mode — which allowed players to create their own WWE Superstar and progress through a career of their own — always brought me back until the the next iteration would inevitably release.

Fast forward to October 2017 and it is about that time. WWE 2K18 will release in just a few weeks with new features, game modes, and gameplay improvements that may not change the series entirely, but rounds out some of the jagged edges that were prevalent in previous titles. I was lucky enough to attend a preview event at the WWE Archives where I was able to try out these upgrades for myself.

As I was preparing for my first match in WWE 2K18, I wanted to choose a Superstar with an over-the-top entrance that I assumed would be hard to replicate. Shinsuke Nakamura seemed like the perfect choice. To further live out a fantasy of mine, I chose A.J. Styles as his opponent at Wrestlemania.

“I wanted to choose a Superstar with an over-the-top entrance that I assumed would be hard to replicate. Shinsuke Nakamura seemed like the perfect choice.”

After the incredibly long load time completed — unfortunately, those have made a comeback — and the sold out outdoor Florida stadium appeared on screen, it quickly became dark with cheers coming from the crowd. The music queued and Shinsuke Nakamura trotted to the squared-circle in a genuine recreation of his iconic entrance.

As he made his way to the ring, a few things stood out as massive improvements from last year’s iteration. One of the notable upgrades made to WWE 2K18 is the new graphics engine. The dichotomy between last year’s visuals and the upcoming iteration are very apparent. Nakamura is one of the odder looking character models in the game and even he looked great.

Another reason I picked the King of Strong Style was do to his sporadic movements as he moves up to the ring. It was a good litmus test for how well the WWE Superstars were animated. Although it is an upgrade from WWE 2K17, it is slight. Nakamura’s movements were very floaty; it didn’t have the realistic motion that some game’s flaunt nowadays.

That doesn’t mean the title’s presentation is poor. Quite the contrary, WWE 2K18 is a faithful representation of how any of WWE’s programming would roll out. From the show-specific title cards to the somewhat corny dialogue from the announcer’s table, it felt like I was watching an actual match. At least, at first. Some of the announcer’s dialogue seems to get repetitive and the “copy and paste” nature of the game’s audience threw off the immersion.

As much as I wanted to watch A.J. Styles’ phenomenal entrance, I wanted to actually play the game. Right as the bell rang and I went into my first grapple, the improvements to WWE 2K18‘s combat are incredibly noticeable. Unlike the floaty movements from the entrances, the animations for the character’s movement felt more lifelike. Watching Nakamura hit a running knee as Styles was caught tired in a corner is something right out of my Wrestlemania dreams.

I have always enjoyed the gameplay of 2K Games’ WWE 2K series. While it has its fair share of problems, I always enjoyed my time playing each addition to the franchise. However, their is one mechanic that is still used in WWE 2K18: the submission wheel. My least favorite part of playing the series is engaging in a submission and playing through the clunkiest mechanic in the game. It does feel smoother in the upcoming title and there is a second option if you hate the submission wheel as much as I do.

“While it has its fair share of problems, I always enjoyed my time playing each addition to the franchise.”

Another litmus test I had was booking an eight man battle royal with WWE Superstars such as Curt Hawkins, Seth Rollins, TJP, and more. Since the match needed a big man, I decided to play as the Monster Among Men, Braun Strowman.

This was a good opportunity to try the new carry system. It allows you to drag, carry, and place your opponent anywhere in the ring. You can also do it in the middle of a move, such as Braun Strowman’s running powerslam. While the new system is really cool when it works, I had a rough time initiating the carry.

With that being said, I thought the eight man battle royal would chug a little. It exceeded my expectations and ran as well as a singles match.

The rest of my play time was dedicated to experiencing this year’s new and improved MyCareer mode. Similar to prior games in the popular WWE 2K franchise, WWE 2K18 allows you to create a player and progress through his career as you win championships and become a WWE Legend.

However, unlike previous iterations, you will choose between eight fighting styles — high flyer, showboat, striker, technician, brawler, strong style, powerhouse, and giant — each with its own unique attributes. Additionally, your weight not only determines your weight class, but how your stats will be allocated. For example, I created a superstar with a strong style fighting style. When I increased his weight, my grappling, toughness, and athleticism were all affected.

In the new MyCareer, you play as the “hottest free agent” in wrestling. Similar to WWE 2K17, you begin at the WWE Performance Center training with real-life NXT head coach, Matt Bloom (a.k.a. Albert). You will go through a series of tutorial matches to help get you acquainted with the game’s controls and mechanics.

One of WWE 2K17‘s new features will be making a comeback this year. Promos are getting a slight improvement, but will, for the most part, function the same way as it did in the last iteration. The enhancements are tied to the actual written dialogue than its mechanics. The choices will be more specific and the words coming from the plethora of WWE Superstars will be similar to what they would actually say.

“While I didn’t get to try the promo feature in front of a crowd, the tutorial for it lacked voice acting which was a bit disappointing.”

My one complaint from last year’s promo feature was the lack of spoken dialogue. When I watched my character energetically walk around the ring only to be mouthing words in a quiet venue, it took me out of the experience. While I didn’t get to try the promo feature in front of a crowd, the tutorial for it lacked voice acting which was a bit disappointing.

After completing your training, Bloom will let you walk around backstage to talk to different NXT Superstars that you may recognize. You will also have to talk to certain people to change your outfits or to change your pose featured on the card. While my time with the backstage area was limited, it was neat to walk around and chat with the Authors of Pain and Triple H. I wish I had the time to have seen what actions dictate which path you take between becoming a company man or a fan favorite.

My three to four hours with WWE 2K18 were nothing less than enjoyable. While all the adjustments to this year’s iteration are slight, it has been improved enough for it to seem like a complete overhaul. However, my love for professional wrestling hasn’t blinded me to its faults. The submission wheel mechanic, the lack of voice over, and some presentation flaws will temporarily disrupt your immersion. Overall, this seems like a WWE 2K title that any pro wrestling fan will enjoy.

WWE 2K18 will be available for PlayStation 4, Xbox One, and PC on October 17, 2017. The Nintendo Switch version will be available sometime this year. Enjoy some new glorious screen shots of Bobby Roode, Finn Balor, Breezango, and more that are too sweet.

What’s in the Rust March 5 2021 Update? Rail Network Detailed in Patch Notes
Elden Ring Fan Takes up a Tough Challenge Until The Game’s Release Day
Hu Tao Story Quest – How to Complete Perfect Send Off Door Puzzle
Free Game For All | Play at Home – March Update
Wine and Song in Genshin Impact – How to Get, Ability, Materials, Stats